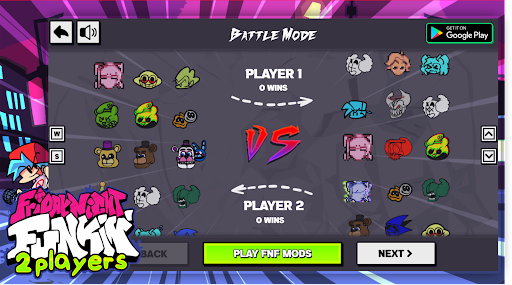 For the Friday Night Funkin’ fans, we got a surprise! Now, you can play your favorite rhythm game in 2 players, from the same tablet or smartphone!

You can select your player from a big list of more than 50 characters, 30+ songs, and multiple difficulty settings.

Take in mind that each character has multiple phases, for example, you will find 7 different animations and vocals for Tricky. That’s a lot!

You can select one of two modes to play:

Here we mimic the original concept and mechanics of FNF, that’s means that you need to catch the arrows to make vocals that in combination with an instrumental will make a song. Because is a battle, the best will win.

There are 2 ways to win a battle when the opponent has no life left, or, when the instrumental/music is done – then, the winner will be the one with more life.

2) PlayGround Test
Here you can choose your favorite characters and test their vocals with or without instrumental. Everybody wins!

After each game, you can choose other mods, characters, songs, or difficulties.

Features:
– 50+ FNF Characters
– 30+ Songs
– 6 difficulty modes
– 2 different modes
– improved mechanics for mobile and tablet, the arrows come from the top, and you can press all the way down
– the game is free to play because it is ad supported

What do you think? Should we start a battle?…
Update 7.5.0
– fixed some minor bugs regarding the loading of the game

Update 7.3.0
– improved the mechanics
– fixed minor bugs
– eliminating unnecessary elements from the game
– added +50 characters to choose from
– added +30 songs to choose from
– improved the overall UX and design of the game
– added 2 different mods to play, “Battle Mode” where we recreated the mechanics from the original game, and “PlayGround Test” where you can test the vocals of your favorite characters